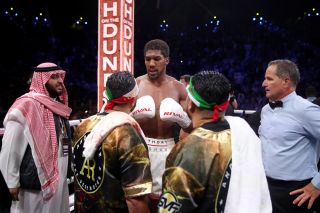 Saudi Arabia will again be the venue for a showpiece sport event as Jeddah plays host to the Spanish Super Cup.

The Middle East kingdom, though, continues to come in for criticism from human rights campaigners such as Amnesty International.

Here, the PA news agency takes a look at events which have headed to Saudi Arabia – and the ‘sportwashing’ controversy surrounding them.

Britain’s Anthony Joshua reclaimed the IBF, WBA and WBO world heavyweight titles with a stylish victory in his rematch against Andy Ruiz Jr in Riyadh during December 2018.

However, the chosen destination for the showpiece fight – dubbed ‘Clash on the Dunes’ – drew criticism from Amnesty International, which cited human rights violations, the murder of journalist Jamal Khashoggi and the ongoing war in Yemen.

Joshua had been called upon to use his platform to speak about against the regime. Promoter Eddie Hearn, though, defended the decision as boxing followed other high-profile sports to the region.

“We understand some criticism, but we also understand the people that have been there before us – organisations that are considerably bigger than us,” Hearn said in the build-up to the fight.

“There is time for change there – and they are trying to make that change through sport.”

Rory McIlroy ruled out competing at the upcoming 2020 Saudi International European Tour event, confirming there was “a morality” behind his decision.

Northern Irishman McIlroy refused to deny a report he had been offered a 2.5million US dollars (£1.9million) appearance fee. He told the Golf Channel: “It’s just not something that would excite me.

“You could say that about so many countries, not just Saudi Arabia, but a lot of countries that we play in that there’s a reason not to go, but for me, I just don’t want to go.”

McIlroy added: “One hundred percent, there’s a morality to it as well.

“I think the atmosphere looks better at the events on the west coast (of the United States) and I’d much rather play in front of big golf fans and play in a tournament that really excites me.”

Khan on the money

Thank you for having me in Saudi Arabia @amirkhanpromo@SBLHitHarder@BillDosanjh@BillyDib@ArizaFitness1pic.twitter.com/b8bbt6Czwb— Amir Khan (@amirkingkhan) July 14, 2019

Before the ‘Clash on the Dunes’, Saudi Arabia had fronted Amir Khan’s WBC international welterweight title fight against Billy Dib during July 2019.

The British boxer outgunned an inferior opponent who had stepped in at short notice and moved up weights, as Dib’s corner eventually threw in the towel at Jeddah’s King Abdullah Sports City.

Amnesty International has said the nation was in the “grip of a sweeping crackdown against critics of the government” – and implored Khan to travel there with his “eyes firmly open”.

Khan, though, claimed Saudi Arabia was undergoing significant social change. “Maybe now they are changing to make it that new place where people can enjoy themselves and it’s fair for women,” he said.

The Briton, reportedly being paid a £7million purse, added: “They are throwing a lot of money on to the table, and at the end of the day we are prizefighters. For me, I would be stupid to not take this opportunity.”

Heavyweight boxer Tyson Fury headed to Saudi Arabia to make his WWE debut at the ‘Crown Jewel’ event during October 2019.

The British fighter backed up his trash talk hype by flooring Braun Strowman with a big right hand to ‘win’ by count-out at the King Saud University Stadium.

The organisers, though, were again criticised for supporting what Amnesty International described as an “abysmal human rights record” from their hosts.

Saudi Arabia became the sixth different country to host a Supercoppa Italiana when Juventus took on AC Milan in January 2019.

Cristiano Ronaldo’s goal was enough to give Juve a 1-0 win at King Abdullah Sports City.

However, humanitarian organisations had appealed to both clubs and the Serie A league authorities over the choice of location – a decision which Italy’s Deputy Prime Minister Matteo Salvini labelled as “disgusting” given the restrictions set for women attending.

Despite the ongoing controversy, the following season saw the showpiece Italian fixture held in Riyadh, where Lazio beat Juventus 3-1 on December 22 2019.

The world’s richest horse race will be held in Saudi Arabia during February 2020.

The 20million US Dollars (£15.2million) Saudi Cup will be run over nine furlongs on dirt at the King Abdulaziz Racetrack in Riyadh.

The Jockey Club of Saudi Arabia, which has Prince Bandar bin Khalid Al Faisal as its chairman, will arrange and fund the shipment of all invited horses – as well as arranging and paying for the flights and hotel accommodation of the horses’ connections.

October 2020 will see Saudi Arabia host a ranking event for the first time, under a 10-year partnership deal with World Snooker.

The Saudi Arabia Snooker Masters in Riyadh is set to have a total fund of £2.5million – with the top prize of £500,000 the same as the winner of the World Championship will receive.

World Snooker chairman Barry Hearn hailed the move as “a giant leap forward for our sport”.