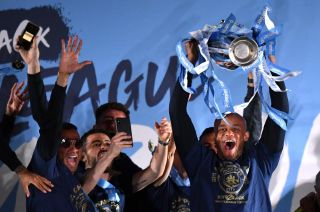 Manchester City returned to the Etihad Stadium to celebrate their latest title triumph with around 10,000 fans on Sunday night.

The newly-crowned back-to-back champions flew north after securing victory at Brighton and headed straight to the stadium where a hastily-arranged party had begun.

The squad and manager Pep Guardiola paraded the trophy as they were cheered onto a stage outside the ground at around 10.45pm.

The Premier League trophy is back at the Etihad Stadium tonight #MCFCpic.twitter.com/RqMyuRgGAU— Andy Hampson (@andyhampson) May 12, 2019

City won 4-1 at the Amex Stadium earlier in the day to pip Liverpool to the title by a point.

“I am so proud,” said captain Vincent Kompany, who has now won the Premier League four times.

“This team is amazing. We’re able to fill this place at this time of night – thank you so much. This is amazing.”

City won their last 14 games to hold off the challenge of Liverpool, who beat Wolves in their final fixture.

Playmaker Bernardo Silva said: “After the defeat at Newcastle it was very tough for us. We never expected this to go this way.

“But to win 14 games in a row was unbelievable and now it is time to celebrate.”

City will not celebrate for long. They will return to training on Tuesday to prepare for next week’s FA Cup final against Watford. Victory at Wembley would see them become the first side to win the English domestic treble.

Silva said: “Saturday we have a very important game – the treble, which no one at this club has seen. And next year we want to bring the Champions League back as well.”

City will hold a traditional open-top bus parade to celebrate all their achievements a week on Monday.

Guardiola said: “Back to back is more difficult. Last season was perfect but this season we had an incredible opponent. Congratulations to Liverpool for this incredible season but we did it, we beat them.”