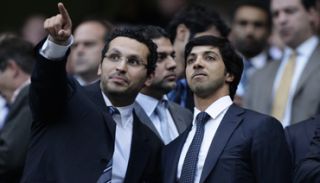 Mancini was hired by the club's mega-rich Abu Dhabi owners in 2009 to turn City into serious contenders for silverware on a regular basis and the suave Italian did just that.

A first league title for 44 years, an FA Cup and three consecutive qualifications for the Champions League made City into a football powerhouse and there will be no shortage of world-class coaches joining the queue to take over the hot seat vacated by Mancini.

So while City fans were waking up with their club in a state of turmoil - a stark contrast to the smooth transition of power at Manchester United where the retiring Sir Alex Ferguson will be replaced by David Moyes - the current malaise is a million miles away from the dark old days when the club were a laughing stock.

The managerial revolving door was in danger of flying of its hinges as a procession of so-called saviours came and went.

Howard Kendall, Peter Reid, Brian Horton, Alan Ball, Steve Coppell all tried and failed to revive the club and each failed, leaving the club back on square one.

In 1999, with the club haemorrhaging money, they slid into the third tier of English football and even the most wildly-optimistic sky-blue-blooded fans could not have envisaged a Premier League title little more than a decade later.

Kevin Keegan and Sven-Goran Eriksson made some small steps forward but now, thanks to hundreds of millions of pounds' worth of investment from Sheikh Mansour's Abu Dhabi United Group since 2008, City are in rude health despite a sobering season.

While their defence of the title was feeble and the FA Cup defeat by Wigan Athletic humiliating, they remain the second-best team in England, are immaculately run and have a new youth academy that will rival any in the world and a squad of players that would be the envy of most clubs in the world.

With the prospect of some major signings in the off-season, City will almost certainly be battling for silverware on multiple fronts next season.

However, the next few days and weeks will be vital if the club are to build on the foundations already in place and regain the momentum that Mancini allowed to seep away.

The competition could be even harder next season with Jose Mourinho favourite to return to Chelsea, Arsenal threatening to open their cheque book and champions Manchester United eager to back new manager Moyes with a large transfer kitty with which to forge his identity.

City's owners have called for a change of direction - a more holistic approach they describe it as - and key to their vision and the hopes of creating a stable environment will now be hiring the right manager to replace Mancini.

Whereas in the past the City job came with a health warning, the current set-up looks enticing for the right man.