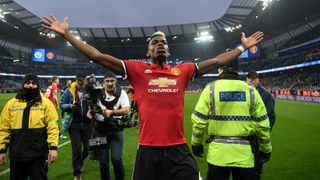 Regarded as one of the best midfielders in the world, Pogba has shown glimpses of his immense potential at Old Trafford while struggling for consistency.

Real Madrid's Cristiano Ronaldo and Barcelona superstar Lionel Messi have dominated the Ballon d'Or with five apiece since Kaka claimed the award in 2007.

But 2005 winner Ronaldinho believes Pogba can add his name to the list of Ballon d'Or recipients.

"He can win the Ballon d'Or, without a doubt," Ronaldinho told Canal Football Club. "I see Pogba as a friend, I don't see myself as his idol.

"He is young, talented and he has the ability to play anywhere, he can play in a free role, defensive, as a runner or attacking.

"He has the characteristics of a player who can fill any position, he can make history."

Pogba – who set up Alexis Sanchez for the equaliser in Saturday's 2-1 victory over Tottenham in the FA Cup semi-final – has found himself out of favour at times this season amid reports of a fractured relationship with United manager Mourinho.

The 25-year-old – a £89million signing from Juventus in 2016 – did not start in either of United's Champions League last-16 matches against Sevilla having struggled to impress Mourinho.

Speculation over Pogba's relationship with Mourinho has sparked talk of a potential move away from Manchester, however, Ronaldinho believes the France international can learn a lot from the Portuguese tactician.

"He knows the substitutes' bench, like me at Paris Saint-Germain with [former coach Luis] Fernandez. It is not the same, when Mourinho tells you that you're on the bench you have to respect that, the other guy, a little less," he said.

"I think Paul really has a lot to learn from Mourinho, who is one of the best coaches in the world. A coach who has won so many titles should be respected. In my case, it was the opposite."

"He is already in a big club and he has everything needed to make history, whether it is this club or another he has to be where he feels happiest," Ronaldinho added.