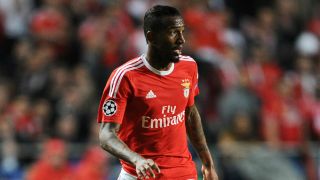 Besiktas say Manchester United will not be able to sign Anderson Talisca from Benfica because they have activated a clause to loan him for another season.

Attacking midfielder Talisca said earlier this month it was his dream to play for United and claimed Jose Mourinho wanted to sign him.

But Umut Guner, president of Besiktas' transfer committee, claims any interested clubs will not be able to strike a deal to sign the 23-year-old for another year.

"There is no deal with Manchester United or anyone else in place," Guner said to Hurriyet.

"We agreed to a two-year deal with Benfica. The loan did have a clause that the option [for a second year] had to be activated, which we did.

"Talisca will stay at Besiktas on loan for another season. Reports claiming that he can be signed for his €25m release clause are false, he has a deal with us.

"If a club wants to sign him now they will have to wait another 12 months."