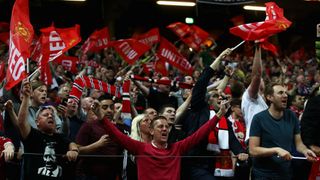 Manchester City sent a message of solidarity to Manchester United following their rivals' triumph in the Europa League final.

Goals from Paul Pogba and Henrikh Mkhitaryan secured a third trophy of the season for Jose Mourinho after their successes in the Community Shield and EFL Cup and sealed a return to the Champions League.

The build-up to the match was overshadowed by the terror attack at Manchester Arena on Monday, which resulted in the deaths of 22 people, including children.

Manchester held a vigil in Albert Square on Tuesday in honour of the victims and in defiance of the perpertrators, while a minute's silence was held before the start of Wednesday's match at Friends Arena in Stockholm.

City and United both posted tributes in the aftermath of the bomb attack and Pep Guardiola's side put their fierce rivalry aside with another classy post shortly after full-time.

The hashtag #ACityUnited, which has been circulating on social media for much of the last 24 hours, was posted via City's official Twitter account moments after the final whistle, the text composed of City's sky blue and the red of their rivals.