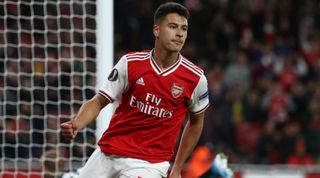 Gabriel Martinelli is turning heads at Arsenal, but Manchester United had the chance to sign the teenager before he made the switch to North London.

Martinelli joined Arsenal in the summer for £6 million from Brazilian outfit Ituano, and has hit the ground running.

The 18-year-old has scored four goals and provided one assist in three games so far this season.

The latest came on Thursday night when he scored a brace and assisted Dani Ceballos in a 4-0 win over Standard Liege in the Europa League.

The Emirates crowd are enjoying the attacker's good form, following his impressive display against Nottingham Forest in the Carabao Cup last week, when he bagged another two goals.

After that game, as reported by The Mirror, Martinelli revealed how he was on trial at Manchester United before joining the Gunners.

"I asked to take a picture with [Patrice] Evra, [Marouane] Fellaini and other guys. [Paul] Pogba knew I was Brazilian and asked if everything was okay with me and where I was playing."

United may well end up regretting the decision not to sign the young Brazilian, although he would be in direct competition with their own starlet Mason Greenwood. At 17, Greenwood is a year younger than Martinelli - but it's the latter who's making the headlines.

Unai Emery believes Martinelli is best suited to the wing, where he ended up playing against Standard Liege once Arsenal's first choice striker Pierre-Emerick Aubameyang entered the fray.

“He prefers to play as a left winger - he also played as a right winger. I am using him as a striker because he played in that position in Brazil," Emery told the press on Thursday night.

"Striker is not the best position for him. But the first thing in his mind is to help us."

Following his free-scoring displays in the cup competitons, Martinelli could now be in the frame to feature against Bournemouth in the Premier League on Sunday.