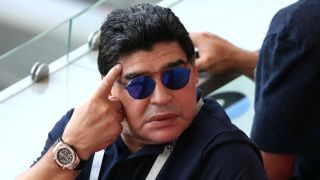 Diego Maradona continued his recent streak of headline-grabbing incidents by going live on a television show to criticise his nephew, Walter Christian Machuca.

The 57-year-old called the Canal9 show 'Confrontados' after Machuca, who is the son of Maradona's sister Rita, spoke about the alleged marriage between his uncle and 29-year-old Rocio Oliva.

Maradona went live on air to hit back at Machuca with a string of comments and defended his relationship with Oliva.

"I'm watching the number one coward, this nephew that I have," said the 1986 World Cup winner.

"I'm laughing at how you put together a show with this false thing, with him.

"He is someone whose mother can't see him and who hasn't seen me for a long time. He broke lots of my cars. He's someone who even stole money from me.

"He's the biggest coward in the world because he hides."

His rant at Machuca continued: "Why do you talk about me even if your mother does not want it?

Maradona was in the headlines earlier in the month when he was paraded through the Belarusian town of Brest after becoming the chairman of local club Dynamo.

He also made the news with his flamboyant celebrations in the stands at the World Cup and was warned by FIFA about his behaviour.