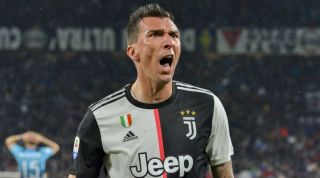 The Croatia international has been frozen out by the Italian champions since the arrival of Maurizio Sarri as coach over the summer.

He was left out of the Italian club’s Champions League squad and is yet to feature in any competitions for Juve this season.

United has long been touted as his most likely destination and Tuttosport reports that the 33-year-old wants to make the move as soon as possible.

Mandzukic is keen to begin training with the Red Devils next month to give him time to adjust to his new surroundings before a transfer s made official in January.

This would only be possible if the two clubs reached an informal agreement and the Turin club agreed to let hm leave early.

The striker is no longer training with the Juve first team, instead following an individual routine at different times from the squad.

However, Calciomercato reports that a move to Old Trafford is by no means certain as Mandzukic has also attracted the interest of several Major League Soccer sides.

Sources have told the outlet that he could be featuring in MLS soon, with the strongest interest coming from David Beckham’s Inter Miami.

Mandzukic played a key role for Juventus under Massimiliano Allegri last season, scoring 10 goals in 33 games across all competitions.

Several of those came in big games, as he netted a brace against Napoli as well as scoring in Serie A games against Inter, AC Milan, Lazio, Roma and Atalanta.

PERMUTATIONS Who's already qualified for Euro 2020? And what do other countries need to do to get there?

QUIZ! How many of the 60 England players with 50+ caps can you name?