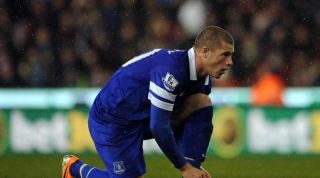 One British newspaper reported on Monday that the 20-year-old midfielder will be the subject of a £38 million bid from Everton's neighbours in the close-season, following a string of impressive performances in the Premier League.

However, Martinez insisted the reports should not be taken at face value, and appeared to rule out a switch to the current league leaders.

"In terms of speculation, we've already turned down a £50 million bid from (Manchester) United, so we're not going to take £38m from Liverpool!" he joked.

"I think it's quite enjoyable to speak about speculation. I think it shows how well our players are doing and those are the type of football compliments we want our way."

The Spaniard also dismissed reports linking defender John Stones with the Goodison Park exit door, but revealed the search was on to bring new faces to Merseyside for 2014-15, when they will be playing UEFA Champions League football if they can hang on to fourth spot.

"We've been well advanced in the search of talent and characters that can help our dressing room," the former Wigan Athletic boss said. "We always do that from window to window."

But when pressed on whether he had shown interest in Espanyol striker Sergio Garcia, Martinez added: "The names coming up out in the press are far far away from the targets we have.

"The recruitment side and the scouting side is always well under way behind the scenes and that will never change.

"The biggest source of recruitment is here, at home. The young players that we produce from the academy really excite me and that's going to be a real focus.

"Obviously we will bring players in who will help the players that we have in the squad, but our squad now is young, we've brought incredible new fresh blood into the squad and what we want to do is develop it, keep it together and make sure we get the best of the dressing room that we have."

Martinez also revealed Everton, who will remain in pole position for fourth ahead of Arsenal if they pick up a win against Crystal Palace on Wednesday, could soon welcome Phil Jagielka back from a hamstring injury, although the captain will not feature against Tony Pulis' side.