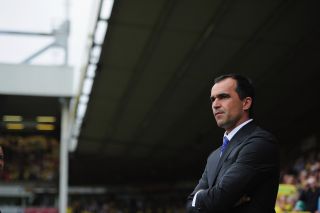 The pair were widely reported to be the subject of a double bid from former Everton and current Manchester United manager David Moyes earlier this month, with the approach described as "derisory and insulting" by the club.

According to Martinez, there have been no fresh approaches made for the duo, with the Spaniard keen to ensure his squad remains as strong as possible.

"Everything has been quiet on that front," he said.

"We're still in the same position we were a few days ago. The concentration now is on West Brom, the opening game of the campaign at Goodison."

Martinez also reiterated Everton's stance that the players are not for sale.

"There is no temptation. In football, you want to keep your best performers and that's where we are," he added.

"Obviously you always get into a debate when there is a club that matches the valuation of a player. Then you need to make a decision.

"That has never been the case and where we are at is that we want to keep our most influential players and build from that."

Everton host West Brom on Saturday as they look to build on their 2-2 draw against Norwich City on the opening day.

Antolin Alcaraz remains ruled out with a hamstring injury while Sylvain Distin and Darron Gibson are doubts for the match.