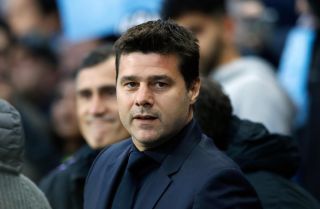 Spurs’ first European Cup semi-final in 57 years did not go to plan at their stunning new home as the Dutch giants ran out 1-0 victors on Tuesday evening.

Donny Van De Beek’s 15th-minute effort proved the difference in north London, where Ajax could have scored more on a night that saw David Neres hit the post late on.

But Spurs did improve after Moussa Sissoko’s introduction for the injured Jan Vertonghen and Pochettino heads to Amsterdam next Wednesday heartened by their improved performance.

“I think it is still open,” the Spurs boss said after the semi-final loss. “It is going to be difficult because we lost the game.

“Now it is about preparing for the second leg and go there and try to win the game.

Spurs were without a number of key players on Tuesday and looked sloppy in the opening exchanges against swashbuckling Ajax.

“I don’t want to talk about the attitude, I think the attitude was there,” Pochettino said. “I think we find a way to play.

“I think the team didn’t show the energy we wanted to show. I think they showed more energy than us.

“In the way that we concede the goal is so painful. I think we were so poor in this action.

“It’s true, in the first half an hour of the game we struggled because they showed more energy, were more productive than us. That I think was the key.

“But, of course, we started to play better and I think the second half was much, much better.

“We pushed them to play deeper and I think we started to press in the way that we wanted to press.

“We started to play more and I think the second half gives us hope for the second leg in Amsterdam.”

Erik Ten Hag wants his Ajax side to learn lessons and improve from their “very good starting point” at the Tottenham Hotspur Stadium.

“I think it was an amazing evening, an amazing result, of course,” the Dutch side’s head coach said.

“I think in the beginning; Ajax was very strong. We were immediately full into the game.

“I think in the first phase of the match, we were completely dominating the game, we made a fantastic goal as well.

“After that phase, Tottenham changed the system, switched to a different gear, was playing much more directly. That caused a few more problems for us.”