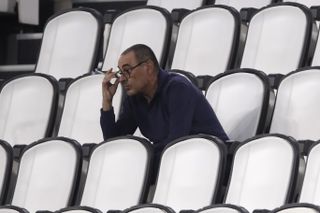 Maurizio Sarri has been sacked as Juventus manager following their Champions League exit.

Former Chelsea boss Sarri, 61, had led Juventus to the Serie A title in his first season at the club but the away goals exit to Lyon on Friday night proved the final straw.

A club statement read: “Juventus announce that Maurizio Sarri has been relieved of his post as coach of the first team.

“The club would like to thank the coach for writing a new page in Juventus history by winning a ninth consecutive Scudetto, the culmination of a personal journey that saw him move through every level of Italian football.”

Cristiano Ronaldo scored twice against Lyon but Memphis Depay’s penalty was crucial to lead the French side to a surprise victory. Juve lost four of the 12 matches since the restart before their exit from Europe.

Following his sacking by Chelsea at the end of the 2018-19 season, former banker Sarri succeeded Massimiliano Allegri in Turin and opened his reign with a 14-game unbeaten run in Serie A, a campaign which featured stronger challenges from Inter Milan and Lazio.

It was to the latter club that Juve first lost in the league last December, allowing the Roman club and Inter into the title race. When domestic football resumed in June after the coronavirus shutdown, Juve’s poor form saw them struggle to beat Antonio Conte’s Inter to the Scudetto by a single point.

Former Tottenham boss Mauricio Pochettino, still out of work nine months after leaving Spurs, has been linked with the Bianconeri role, with previous managers Allegri and Conte, plus Simone Inzaghi of Lazio, also in the frame.

Pep Guardiola, with a year left on his contract at Manchester City, has been consistently mentioned by the Italian press as a potential successor, but the Catalan has publicly committed his future to the Premier League club.

Reports in Italy claim Juve president Andrea Agnelli is keen to speak to Real Madrid, also ousted from the Champions League at the last-16 stage on Friday, about the availability of French head coach Zinedine Zidane.

Ronaldo took to Instagram following Sarri’s dismissal, urging the team to come back stronger next season.

“The 2019-20 season is over for us, much later than usual but yet sooner than we expected. Now it’s time for reflection, time to analyse the ups and downs because critical thinking is the only way to improve,” Ronaldo wrote.

“Winning the Serie A once again in such a difficult year is something that we are very proud of.

“Personally, scoring 37 goals for Juventus and 11 for the Portuguese national team is something that makes me face the future with renewed ambition and desire to keep doing better and better each year. But the fans demand more from us.

“They expect more from us. And we have to deliver, we must live up to the highest expectations. May this short vacation break allow us all to make the best decisions for the future and come back stronger and more committed than ever. See you soon!”