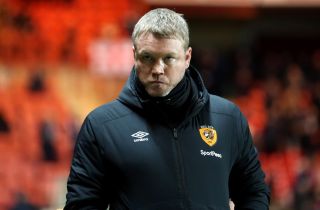 Hull manager Grant McCann praised his side’s “controlled” performance in their 1-0 win at Sheffield Wednesday and hit out at off-the-field distractions before the match.

Jarrod Bowen’s second-half goal saw Hull move to within a point of the play-offs and condemned the hosts to a third straight defeat.

McCann said: “I thought it was a controlled performance. We didn’t get rushed and we didn’t get fazed.

“We looked dangerous when we went forward and I’m really pleased with the group because Sheffield Wednesday tried to knock us, even when we got to the stadium.

“They made me park 10 minutes away in my car – which was strange – and turned all the plugs off in the dressing room so we didn’t have any music.

“But these things are here to test you. We got our heads down and worked hard.

“There were a lot of things before the game that tried to put us off. The hospitality here wasn’t very good, I have to say. Stewards were arguing with my staff over plugs.

“It was ridiculous, to be honest with you. I think it’s really sad that people can do this to opposition teams.

“It is what it is. We focused on the football and got the job done.”

In the game, Hull defender Matthew Pennington was unable to direct the ball on target after meeting Kamil Grosicki’s corner at the far post.

Adam Reach fired wide and Pennington then cleared a shot from Kadeem Harris off the line.

But Bowen (61) struck the winner, drilling a hard, low shot past Cameron Dawson after a good ball in from George Honeyman.

Fletcher and Jordan Rhodes put efforts off target while Jacob Murphy’s ball into the area just evaded the former who was at full stretch.

Wednesday manager Garry Monk said: “I’m not happy at all. I think the over-riding feeling is that it’s been a poor week from us.

“If you go back to the two weeks before, there were a lot of positives and a lot of good stuff with results showing what we’re capable of.

“But then, within a week, three defeats. Of course that’s not good enough.

“I feel angry about that and disappointed and all the emotions that you would expect.

“We haven’t done enough this week to get on the right side of those margins. There’s a lot of food for thought for me.

“As a collective, we need to respond and do it with actions. Actions speak a lot louder than words.”

On McCann’s claims, Monk commented: “I don’t know anything about that. I don’t hand out the parking spaces so it’s nothing to do with me! I park 15 minutes away.”