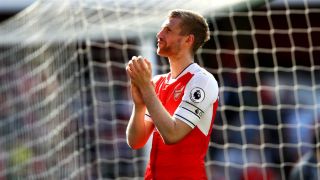 Arsenal defender Per Mertesacker was delighted to make his first appearance of the season on Sunday after finally overcoming a knee injury.

Persistent physical problems kept the centre-back out for almost all of the 2016-17 campaign, but he made a substitute cameo in Arsenal's 3-1 win over Everton on Sunday, coming on to replace Gabriel Paulista for the final 37 minutes at Emirates Stadium.

"We had a couple of injuries before the game that made me in the squad," Mertesacker told the club's official website.

"Then we unfortunately had a red card for Laurent Koscielny and another injury, which gave me a chance to play.

"But I felt quite good, honestly. What I did in training over the last year paid off. Being on the pitch with the boys is what I used to do for 15 years. I am still learning but I am used to it.

"Take nothing for granted but it was special."

Arsenal missed out on a top-four place as Liverpool beat Middlesbrough 3-0, but Mertesacker has already turned his focus toward the FA Cup final against Chelsea.

"It was a nice atmosphere after a win and we appreciate the fans and vice-versa," the 32-year-old added.

"It was a nice atmosphere but we did not get what we wanted, so there is a little bit of disappointment.

"But heading to the FA Cup final is something we are buzzed about."