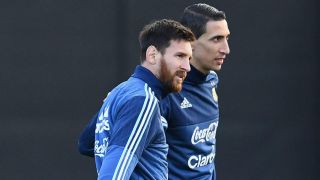 Lionel Messi is "the greatest player ever" and should be considered that even if he never wins a World Cup, according to the Barcelona star's Argentina team-mate Angel Di Maria.

Messi broke Gerd Muller's long-standing record for the most league goals scored for the same club in Europe's top five divisions on Sunday, netting a free-kick in the 4-2 win over Real Sociedad.

That took him on to 366 goals, a figure which remarkably took just 400 matches to reach in what has been an astonishing career to date.

Messi has won nearly everything on offer, both individually and as part of a team, but, in the eyes of some, he will not be seen as the best to ever play the sport until he wins a World Cup with Argentina.

366 - Lionel Messi is now the player with the most goals scored in one of the top five European leagues, surpassing Gerd Müller (365 in Bundesliga). Milestone. January 15, 2018

Paris Saint-Germain star Di Maria believes that view is nonsense, however, adamant that Messi is already there, regardless of his World Cup failures.

"Messi is already the greatest player ever and winning a World Cup would confirm that, but he's already the best," Di Maria told the official website of the 2022 World Cup's Supreme Committee for Delivery and Legacy.

"Argentina are always among the favourites for the tournament and that'll be the same this year.

"That's mainly because we have Messi. There are also other teams at a high level such as Spain or France, but Argentina are among the best."

Despite the presence of Messi and several other world-renowned stars in their squad, Argentina struggled to qualify for the upcoming World Cup.

A Messi hat-trick in a 3-1 win over Ecuador helped Argentina scrape through on the final day of qualifying in October, though Di Maria feels things will be different in Russia when they go up against Iceland, Croatia and Nigeria in Group D.

The PSG attacker said: "We must continue working hard to stay on top, but the World Cup tournament is always very different from the qualifying rounds.

"If you don't win in the tournament, then you go home. That's why these matches are so special.

"This year we have a World Cup that we hope to win. But whether we succeed or not, with some luck we can also win in Qatar [in 2022]."