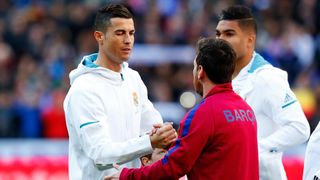 Lionel Messi insists he does not compete with Cristiano Ronaldo to be considered the world's best player, although he admits he finds it motivating to see Real Madrid in the Champions League final.

The attacking duo have shared the Ballon d'Or between them since 2008, winning five each, and are widely considered to be the greatest footballers of their generation.

Debate continues to rage over who should be considered the better player and Ronaldo even claimed in December, after winning his fifth Ballon d'Or, that he should be seen as the finest in history.

Messi, though, says he is not interested in striving to be acknowledged as the very best, even though watching Ronaldo and Madrid prepare for a third European final in a row has given him an extra drive to succeed.

He continued: "It's not an objective to be the best in history. The fact that these things are spoken of about me, well, that's that. I never set out to be the best, second best, third or fourth.

"I compete to improve myself year after year, to surpass what I have done before. The more trophies I've won at the end of the season, the better, and obviously with the national team, which is something I still don't have."

Ronaldo was a huge success in England with Manchester United before joining Madrid in 2009, having started his career with Sporting CP, while Messi's entire professional life has been spent at Camp Nou.

However, the 30-year-old does not think he has to move to another league before retiring in order to prove any doubters wrong.

"I don't need to go to another team to show anything to anyone," he said. "You look at other leagues, but at the moment of deciding, it's very difficult to leave Barcelona."

Barca took back the Liga title from Madrid this season, with Zinedine Zidane's side struggling for consistency throughout their domestic campaign.

Madrid also survived scares in the Champions League knockouts against Juventus and Bayern Munich to reach another final, but Messi says their determination to battle through such ties should be commended.

"It's something they have," he said. "Playing badly, they win, and sometimes that costs us a little bit. We have to be far superior against them to win."

Messi will soon begin World Cup preparations with Argentina, who are looking to go one better than they managed four years ago, when they lost the final to Germany.

That defeat, coupled with similar failures in two Copa America finals, prompted the forward to suggest Argentina's senior players would have to retire from international football if they fail in Russia.

He has since changed his mind, though, stressing: "After saying the words, I thought about it with a cool head and realised that leaving the national team gave the wrong message to the youngsters and the people who fight for their dreams. You have to keep trying.

"The fact we were finalists and weren't able to win is a weight that we carry. We want to overcome that barrier."

Argentina have been written off by some observers due to their 6-1 friendly thrashing by Spain in March, but Messi, who missed that game through injury, says the scoreline did not tell the whole story.

"It was a false result because Argentina were much better in the first half, had more possession for quite some time, and that's not at all easy," he added.