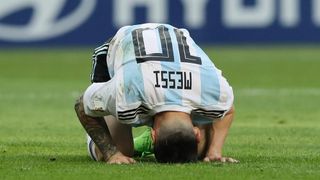 Lionel Messi equalled a long-standing Diego Maradona record but is still yet to score a goal in the World Cup knockout stages.

The Argentina captain recorded two assists as Jorge Sampaoli's side exited Russia 2018 with a 4-3 loss to France, for whom teenager Kylian Mbappe struck a brilliant brace in the second half.

Setting up two goals for Argentina, the second a delightful cross Sergio Aguero headed home to spark hope of a late fightback, Messi matched the two assists recorded by Maradona against South Korea at the 1986 tournament.

However, having failed to find the net, Messi has now played an astonishing 756 minutes in the World Cup without finding the net in a knockout tie.

Messi has lost three major finals with Argentina in the last four years, including the 2014 World Cup showpiece against Germany.

The Barcelona superstar retired from international football in 2016 after missing a penalty in a shootout as Argentina lost out to Chile for the Copa America title.

Yet Messi had a change of heart, returning to the fold to score a hat-trick in Argentina's decisive World Cup qualifier against Ecuador that booked their place in the field for Russia.

2 - Lionel Messi is the first player to provide two assists in a World Cup game for Argentina since Diego Maradona vs Korea Republic in 1986. Insufficient.June 30, 2018