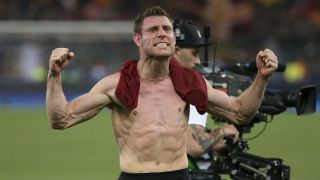 James Milner is the subject of a popular parody Twitter account that, perhaps harshly, brands the Liverpool star "boring".

But the versatile former Manchester City man was quick to poke fun at his own misfortune after Liverpool qualified for the Champions League final on Wednesday.

The Reds progressed 7-6 on aggregate following a 4-2 second-leg defeat to Roma, in which Milner unwittingly netted the Serie A side's first goal – Dejan Lovren's clearance thumping against the 32-year-old's head and beyond goalkeeper Loris Karius.

Taking to Twitter shortly after full-time, Milner asked: "Anyone got any tips for getting a Champions League logo off a face?"

Anyone got any tips for getting a Champions League logo off a face? May 2, 2018

Speaking to BT Sport, he added: "The first goal was ridiculous – you could do that 1,000 times and it's not going to happen again."

The result sends Liverpool – for whom Sadio Mane and Georginio Wijnaldum found the net at the right end – into the final against Real Madrid in Kiev on May 26.

But Milner insisted he would not be celebrating his side's progress to the showpiece with a glass of red wine.

"Maybe for a few of the boys," he said. "You know me, I might stretch myself out to a Ribena or something."

Madrid have won the last two editions of the tournament, while the Reds have not been champions of Europe since 2005.