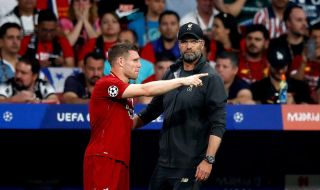 James Milner was ridiculed in many quarters when he left a successful, title-winning Manchester City side to join Liverpool.

He took a pay cut to do so because he wanted a more regular role having become frustrated at being left out for big matches.

Ironic then he was on the bench for the Champions League final but he played an important part as a second-half substitute, using his vast experience to get the side over the line when Tottenham turned up the pressure.

However, with a Champions League winners’ medal to add to his collection the 33-year-old has had the last laugh.

“Liverpool has a great history and when I signed for the club I was desperate to add trophies as this club expects to win trophies and it has an amazing history but we want to create our own history,” he said.

“We have started that and put a trophy on the board. When I was at City and we won the first FA Cup, that was massive for us and that gave us the belief and the winning mentality that we can do it and hopefully this will be the same.

“We will enjoy it for as long as we can but we will come back pre-season and go again.

“I think it will be nice going to Melwood seeing number six (of their European Cups) there.

“It feels amazing. Any time you win a trophy is really special.

“Obviously after last year (losing to Real Madrid in the final), getting 97 points in the league and not getting it over the line, this was great heart from the boys.

“We did not play well but a cup final is all about getting the result.

“It shows how much we have come on as a team and that is the effort and experience of getting to those finals and those disappointments that we saw the job through.

“You have to enjoy these moments. You play so many games and have disappointments throughout your career, you can be lucky if you win one trophy.

“You have to enjoy it as it does not come around very often.”

Milner, as the experienced pro, has seen plenty in the squad for him to predict there are more trophies to come.

“The first trophy is always the hardest one to win for a group of players and hopefully that will help us,” he added.

“You can see the improvement over the last few years since the manager has come in and seen how the team has improved.

“That has been something we have done well this year when we have not played well but still got the results.”

The midfielder was also pleased for Mohamed Salah, who scored the opening goal with a penalty – which would have been Milner’s job had he started – after being forced off with injury 30 minutes into last season’s final.

“After last year and what happened was tough for him and tough for all of us,” he said.

“His numbers do not look so good this season but look at him isolated and he is a victim of his own success.

“But Sadio (Mane) has been incredible and also Bobby (Roberto Firmino) coming back from injury, but Divock (Origi) as well.

“Those three guys, he (Salah) pushes them in training and his finishing is ridiculous as you have seen and he keeps coming up with important goals.

“You need a good squad to be successful and it is a young squad, which is the most pleasing thing.”