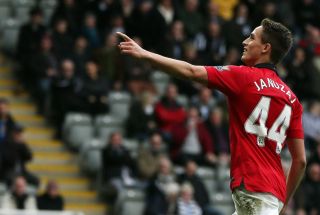 Manchester United starlet Januzaj, 19, declared his allegiances to the European nation despite also being eligible for Kosovo, Albania and Serbia among others.

Mirallas, a 43-time Belgium international, is pleased the teenager chose his country, but said he should not be selected for Brazil 2014.

"There was a lot of pressure on him to make his mind up, and it is good for Belgium that he has chosen us, because he is a good player," Mirallas said.

"But I don't think he should go to Brazil. It would not be fair to leave out another good player for someone who does not know the others and has not played a lot for his club in recent months.

"Adnan does not know the group, and the fact is, he has not had much game time at Manchester United lately.

"He has yet to prove at United that he can be their number one asset in his particular position. I think for him, the European Championships in 2016 would be a more realistic target."

Mirallas has been ruled out for the rest of the Premier League season with a small groin tear, but is expected to be fit for the World Cup.