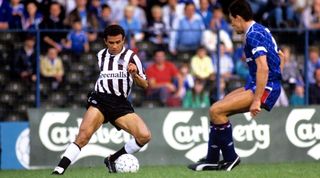 Mirandinha has identified a surprising moment as the highlight of his spell with Newcastle United: being asked to turn on the city’s Christmas lights.

The former striker has looked back on his time on Tyneside in the July 2020 issue of FFT – a Brazil special out in shops now and available to order online with free delivery.

He spent two seasons with the Magpies between 1987 and 1989, becoming the first Brazilian to play in English football, and looks back on the period fondly.

“I’m very proud of that. Even though I played in four games for the Brazilian national team, my time at Newcastle was the peak of my career,” he told FFT.

“I had the opportunity to live in a great country. I’m grateful for the way the people welcomed me and my family, and for the heartwarming way they still receive us whenever we go back to visit the city.”

He added: “When I played for Newcastle, the most remarkable moment wasn’t a match; it was being invited to open the city’s Christmas festivities – I left the Town Hall on a Santa sled!

“That was such a touching moment. I’d never experienced something as grandiose as that before, and only Newcastle legends like Kevin Keegan were asked to do it.

“To share that day with my wife and kids was truly incredible. I say that not as an ex-player, but as a human being.”

Mirandinha also shed some light on how his move from Palmeiras came about.

“One of my good friends, Humberto Silva, was on a university exchange scheme in England,” he said.

“He had a good relationship with the agent of Nigel Mansell, who was close to ex-Newcastle striker Malcolm Macdonald. So, Malcolm began mentioning me to Newcastle, and he did it for about a year.

“Then came the Rous Cup in May 1987 – I played well and scored in a 1-1 draw with England at Wembley. After that we beat Scotland 2-0 at Hampden Park and I was the man of the match again, even though I didn’t score. Newcastle manager Willie McFaul was watching closely, and he liked me.”