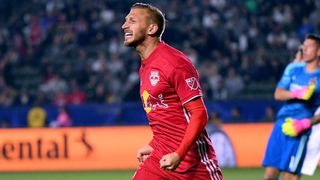 A last-minute Daniel Royer goal was enough for New York Red Bulls to draw 2-2 at Vancouver Whitecaps and move into first place in the Eastern Conference of MLS.

The visitors took the lead in the fifth minute at BC Place Stadium on Saturday, when Royer took advantage of a defensive misunderstanding to slot home Bradley Wright-Phillips' pass at the back post.

And Watson repeated the feat on the hour mark, guiding Felipe's set-piece beyond Luis Robles to make it 2-1.

Red Bulls were not to be denied, though, Royer timing his run at the back post perfectly to meet Tyler Adams' 90th-minute free-kick and smash the ball into the back of the net.

The result left Red Bulls in top spot, although they are level on points and have the same goal difference at Atlanta.

Elsewhere on Saturday, Cory Burke and Ilsinho scored well-taken goals in the second half as Philadelphia Union won 2-0 at home to New York City, who had Ronald Matarrita sent off in injury time and drop to third place.

In the Western Conference, Sporting Kansas City were clinical in beating Portland Timbers 3-0 at home, Diego Rubio bagging a brace in the space of five first-half minutes, before Johnny Russell added gloss to the scoreline late on.

That victory temporarily sent Sporting KC top of the standings, but FC Dallas asserted themselves and regained first place courtesy of a 2-0 victory over Minnesota United, their first win three attempts.

Albert Rusnak became the first player in MLS history to equalise and then net the winner all in injury time as Real Salt Lake pounced to beat Houston Dynamo 2-1 away from home.

Chris Wondolowski cancelled out Lucas Janson's goal as San Jose Earthquakes came from behind to draw 1-1 at Toronto.