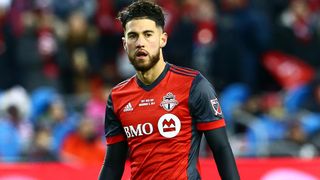 Toronto came from behind to earn a point in an eight-goal MLS thriller against DC United, while Josef Martinez scored again Wednesday.

In an incredible clash at BMO Field, Toronto came from 3-0 down and then needed a stoppage-time equaliser to draw 4-4 against DC.

Yamil Asad completed a team move to open the scoring for the visitors, before Paul Arriola headed in their second.

DC struck again on the stroke of half-time, Darren Mattocks scoring to make it 3-0.

But Toronto rallied after the break, scoring twice in the space of nine minutes to get back into the game.

They completed the turnaround with four minutes remaining, Nick Hagglund heading in a Justin Morrow cross.

While Toronto had all the momentum, DC retook the lead as Asad tapped in a Patrick Mullins cross.

But the hosts had one more response in them, Hagglund heading in an Osorio cross at the back post in the 92nd minute to see the teams share the spoils.

In Columbus, Eastern Conference leaders Atlanta United were too good for the Crew in a 2-0 win.

Martinez scored for the fourth straight game, netting his 14th of the season with a 30th-minute header.