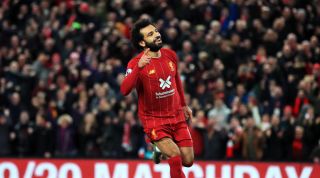 Liverpool forward Mohamed Salah says he is relishing the challenge of facing Manchester United this weekend.

The Reds have won 20 of their 21 Premier League games this season, with United the only team to have avoided defeat by the runaway leaders.

Jurgen Klopp's side will be looking to maintain or extend their 14-point advantage at the top of the table with victory over their arch-rivals on Sunday.

And Salah is anticipating a tough game against opponents who often come up with a special plan for the Egypt international.

"You can see from the fans, before and during the game, that they are really excited about playing Manchester United and they really want to win it," he told Sky Sports.

"There is big competition and, okay, that's important, but as a player you don't have to put more pressure on yourself.

"In the back of your mind, of course, you know that the fans are pushing you forward to play better and give even more than what you have, but you have to take it as a normal game. You need to get the three points and just carry on.

Liverpool are seeking their first league title since 1990, having so far failed to finish on top of the pile in the Premier League era.

Salah shoulders much of that expectation given his status as one of the Reds' star players, but the former Chelsea winger insists he can handle it.

"There is of course a big expectation, but the best way to handle it is just to focus on your work and do it in the right way in each game."