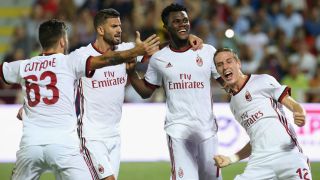 AC Milan boss Vincenzo Montella applauded the attacking hunger which saw his side steamroll Crotone in their first outing of the Serie A season.

The Rossoneri scored three times in the opening 23 minutes to get their campaign off to a dream start at Stadio Ezio Scida after Federico Ceccherini received an early red card for the home team.

Franck Kessie, Patrick Cutrone and Spanish playmaker Suso all got on the scoresheet in a frenetic opening spell as a new-look Milan made light work of the 10-man hosts.

Although they failed to add to further goals, Montella found plenty of cause for optimism in his team's performance.

"The attitude of my players really pleased me. They played with attention and intensity," the former Italy striker said.

"The sending-off made everything easier.

"But there are things to work on. We need to improve our game management in order to become a winning team."

All eyes were on Milan's crowd of new signings but they were overshadowed by 19-year-old Cutrone, who was central to each of the three goals.

The Italy youth international scored the visitors' second to open his Serie A account but deflected praise to team-mate Suso, for whom he later turned provider.

"Suso put in a great cross, I cut to the front post and watched the ball come to me," Cutrone said of his header.

"It is a great feeling to score my first goal in Serie A."

Cutrone will face competition to keep his spot from new signing Nikola Kalinic, who could debut against Cagliari at San Siro next weekend.