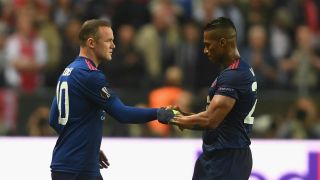 Rooney has lost his starting berth under Mourinho to heighten speculation over a move away from Old Trafford.

The 31-year-old had to settle for a stoppage-time cameo in Wednesday's Europa League final win over Ajax but Mourinho has stressed a transfer is by no means a guarantee.

"Wayne was ready to play, he was a big option. But I did not need to attack at 2-0," Mourinho told reporters.

Campeones! Because we love to see you all smile. Porque nos gusta veros sonreír. May 24, 2017

"I told him Tuesday that he could be the key man but he can perfectly be here next season.

"He is a very important player for us. If he stays next season I would be very happy."

Mourinho brought in his Stockholm goalscorers Paul Pogba and Henrikh Mkhitaryan, along with Zlatan Ibrahimovic and Eric Bailly ahead of the 2016-17 campaign and the United boss is keen to add to his ranks once more.

"Ed Woodward has my list, what I want, what I would like for more than two months," Mourinho added.

"So now it is up to him and the owners."