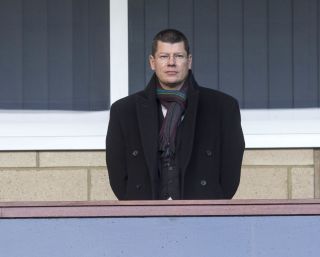 Neil Doncaster has urged Scotland’s clubs to work together to get through the coronavirus pandemic after the collapse of reconstruction talks sparked anger and recriminations.

Falkirk claimed Scottish football had become an “utter shambles”, Partick Thistle called Premiership clubs “thoughtless and selfish” and Hearts accused their rivals of “appalling disrespect” after a number of top-flight clubs decided to block any plans for reforming the leagues.

Thistle’s relegation to League One now looks certain, while Falkirk will be denied promotion after finishing a point behind Raith Rovers when the pandemic stopped play. Hearts will be relegated if the Premiership is called in the same way as the lower leagues.

Doncaster told BBC Radio Scotland: “This is a passionate game and clearly when football is not being played and businesses in general are under massive pressure, you can expect passionate comments to be made.

“I think it’s unfortunate because passionate claims don’t help the cause.

“We are trying to work together for the benefit of 42 clubs and get the game back up and running as soon as possible.

“The more we have criticism and infighting, the more difficult that is because instead of working on a plan to get games back up and running, me and my team are appearing on programmes like this trying to defend rather than getting on the front foot and getting games back on as soon as possible.

“You have got to remember we are a sporting competition and every year you get champion clubs and clubs who are relegated.

“Clearly nobody expected a line would have to be drawn under the lower-league season at this stage because of the Covid-19 crisis but we have to deal with the consequences.

“You could go down the road of voiding the season but how would the likes of Dundee United feel about that? And that’s aside from the legal ramifications.

“Ultimately in a sporting competition you have to have a pragmatic way forward.”

Doncaster stressed the league set-up was a decision for the clubs.

“You probably need 11 votes out of 12 in the Premiership and 75 per cent in the other leagues, so it was always going to be a difficult challenge,” he added.

“I was told from the Premiership meeting on Friday that whilst there was a genuine sympathy for the idea of reconstruction talks progressing, the view was that now wasn’t the time.

“I do think there remains an open-mindedness to look at reconstruction. The people on the reconstruction board put in a huge amount of work and I would hope that won’t be wasted.”

Doncaster stressed there were no easy answers.

“This is an unprecedented crisis and leagues are having to respond to that in the best way they can,” he said. “These sorts of things will play out across Europe.

“We all recognise that we can’t play games – there’s a government directive that means there’s no football until June 10 at the earliest.

“Some leagues – the German and English – are trying to get games on behind closed doors. It will be interesting to see whether they can succeed. I see a third Brighton player has been reported for Covid-19 and I believe one of the German teams is in self-isolation as a result of a player testing positive.

“The French league have done what we did, they have drawn a line under the season on a points-per-game basis.”

The Premiership now looks likely to be brought to an end in the coming days or weeks.

“We know how many players are out of contract in May and during June and that will put clubs in a very difficult position and unable to play their remaining games, certainly not with the squads that started the 19-20 season,” Doncaster said.

“The board have committed to consulting with clubs and are looking forward to hearing some feedback from the Premiership meeting on Friday which I believe covered this issue.”