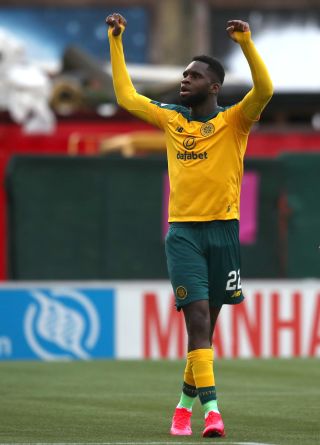 Edouard has netted five goals in as many games since Leigh Griffiths was installed beside him after the Frenchman led the line alone for much of the season.

The France Under-21 international hit two goals in Sunday’s 4-1 win at Hamilton – netting from a free-kick and then finishing off after good skill and a one-two with Tom Rogic.

“He is a mercurial talent,” Lennon told Celtic TV. “If you look at both his goals at the weekend they are very difficult and he makes them look easy.

“His movement off the ball, I think it helps sometimes having a body around him, him and Griff, particularly at Kilmarnock, the two of them linked up brilliantly. His all-round game is improving all the time.

“He is just quiet and then all of a sudden he bursts into life and you see these touches of genius or flashes of brilliance and you are like ‘wow’. He takes your breath away sometimes.

“As a boy he is just so easy going, he seems very, very happy with life at the minute.

“But what pleases me is that’s 22 goals already this season, that is a fantastic return from him. And at times he has had to take on all the responsibility on himself.

“But just with this change of shape he has a bit more support around him and he seems to be thriving on that as well.”

Lennon is also excited at Ryan Christie’s return to action after suspension and groin surgery. The Scotland international came off the bench at Hamilton and set up Christopher Jullien with a ball from out wide that prompted his manager to run on the pitch and hug him.

“His energy is fantastic and his enthusiasm is fantastic but more than anything it’s his quality,” Lennon said. “The quality of the ball for the second goal was (Kevin) De Bruyne-esque.

“Having Ryan back after being out for a month is such a bonus for us.