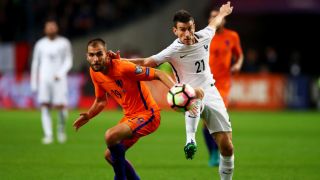 Dost struggled to replicate his stunning club form - netting 59 goals in two Primeira Liga seasons - on the international stage, scoring just once for his country.

His Netherlands career has been restricted to a fringe role, and with little sign of improvement following the arrival of Ronald Koeman, Dost has opted to call time on international football.

"I have suppressed the feeling that I wanted to stop with [international football] for a long time," Dost said, as reported by AD.

"The fact that I felt really rotten for a week [after the last international break] was the deciding factor.

"It did not go well with Netherlands for whatever reason. I have come to the moment when I say 'no more'. It just has not worked."

Koeman insists he would have given Dost opportunities, adding: "Bas told me personally - I think that was good of him. I'm sorry he is retiring.

"I certainly saw a role for him with Netherlands. When I started as the national team coach, I said that I would like to use the first four international matches to try out players and playing methods so, in that sense, much is still open.

"But I respect the decision he has made, also because I understand that he has had this feeling for some time."