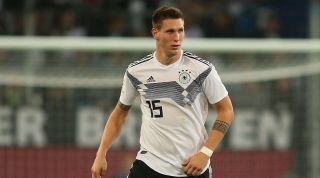 Manchester United have enquired about the availability of Bayern Munich centre-back Niklas Sule, according to sport1.

The Red Devils have conceded 48 goals this season and Ole Gunnar Solskjaer is keen to bolster his defensive options ahead of next term.

Sule has emerged as a leading target for United, who have reportedly sounded Bayern out over a potential £51.9m transfer.

The former Hoffenheim man has become an integral part of Niko Kovac’s team this campaign, making 27 appearances in the Bundesliga.

Bayern see the 23-year-old as the future of their defence, although they could be willing to listen to offers in excess of £50m.

Sule is contracted at the Allianz Arena until 2022, but United hope to bring him to Old Trafford ahead of next season.