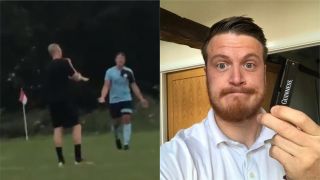 Non-league footballers have swapped playing to the whistle with a musical alternative, after an absent referee meant they had to be officiated using a harmonica.

The pre-season friendly between Tiptree Engaine and Stanway Rovers Reserves had looked to be in jeopardy after its planned referee cancelled on the game and no one had brought a whistle.

THIS IS NON LEAGUE FOOTBALL AT ITS BEST 😂When the referee is late so someone has to be ref for the first 5 minutes, but there is no whistle, but there is a harmonica. 😂😂😂@NonleagueS@NonLeagueCrowd@nonleagueFCTV@GrassRootGoals_pic.twitter.com/z0TgcI4Jcg— Essex & Suffolk Border League (@E_SBorderLeague) August 1, 2019

“With every foul and decision, the referee having to blow into the harmonica, there were a lot of laughs,” Spencer Hume, reporter for the Essex and Suffolk Border League, told PA.

Spencer, 16, said a referee had turned up to watch the game and offered to drive home and change so he could officiate, but before he returned a penalty was awarded to Tiptree with the harmonica being blown.

“Thankfully Harry Runicles was able to stay focused and fire the penalty home,” said Spencer. “(He) dispatched it with aplomb to a C sharp!”

Temporary official Matthew Stacey was replaced by the whistle-bearing referee a little later in the game.

However, the musical interlude seemed to provide inspiration for Tiptree, who went on to win the match 3-0.

Spencer said of club chairman and harmonica-provider Mr Pomphrett: “He literally does anything and everything to make sure his games go ahead come rain, shine or no referee.

“As with all grass roots football teams the show must go on.”