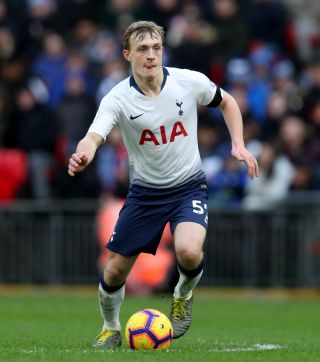 Norwich have signed Oliver Skipp from Tottenham on a season-long loan.

The midfielder moves to Carrow Road as the Canaries prepare for the start of the Sky Bet Championship season next month.

Skipp signed a new three-year deal at Spurs in July having come through the club’s youth system.

“This season is a big one for the club and we’ll be looking to get back into the Premier League.

“I spoke to Max Aarons before coming and he only said positive things about the club. Knowing a few of the boys will help me settle in, so I’m really looking forward to getting started.

“I haven’t played as much football as I’d want but this is a massive opportunity and hopefully I’ll show the fans that I’m capable of taking it.”

Skipp made 11 appearances last season and started against Norwich when the Canaries knocked Tottenham out of the FA Cup in March.

Norwich have also been interested in Chelsea’s Ethan Ampadu and Burnley defender Ben Gibson as they aim for an instant return to the Premier League.

They rejected a £10million bid from Liverpool for left-back Jamal Lewis this month while Ben Godfrey and Todd Cantwell are also attracting attention.