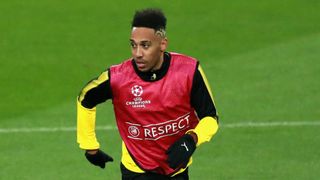 On a day where Alexis Sanchez was left out of Wenger's matchday squad for the second week running ahead of an impending move to Manchester United, Dortmund CEO Hans-Joachim Watzke claimed the Gunners had made a bid for Aubameyang.

Arsenal were far from distracted by any transfer talk at Emirates Stadium as Crystal Palace were swatted aside 4-1, but Wenger insisted the Gabon international's absence from the Dortmund squad was nothing to do with their reported interest.

"Aubameyang no, nothing is happening," he said after Saturday's victory.

"He can be left out of the Dortmund team for different reasons, certainly not for transfer reasons at the moment.

"January has been difficult for us, destabilising. We have had big players concerned with moving away which causes uncertainty."

Wenger also claimed that Sanchez's switch to United will only go through if Henrikh Mkhitaryan moves in the opposite direction, while the Frenchman is expecting a resolution to the situation within the next two days.

Amid all the speculation surrounding Sanchez and Aubameyang, one man who made a timely return to form was Alexandre Lacazette, who netted his first goal in 10 games against Palace.

"Not scoring had played on Lacazette's mind, it was starting to get heavy for him so that is a relief," Wenger said.