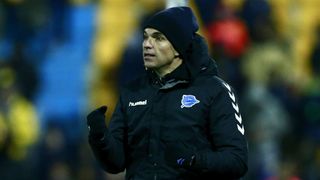 Mauricio Pellegrino has announced his departure from Alaves following the conclusion of their season with a Copa del Rey final defeat to Barcelona.

Alaves came up short in a 3-1 defeat to Barca, despite matching the holders for long periods, and coach Pellegrino is now departing the club after also securing an impressive ninth-placed finish in LaLiga.

The 45-year-old arrived in the Basque Country, where he played for Alaves for a year, at the beginning of the campaign following their promotion to the top flight.

A successful campaign has now seen Pellegrino linked with Sevilla and clubs in the Premier League, but upon announcing his exit he focused on an enjoyable season.

"I've been very happy here as coach and have enjoyed my year," Pellegrino told a news conference. "I want to thank everyone at the club for their help, especially the players.

"I am sure that Alaves will continue growing and fulfilling their goals."