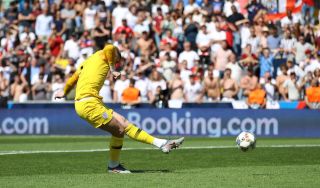 Jordan Pickford admitted to feeling nervous when he stepped up to take a penalty in England’s shoot-out win over Switzerland.

The Guimaraes contest went to spot-kicks after a goalless 120 minutes and Pickford again came into his own, denying Josip Drmic in sudden death after scoring his own effort in emphatic fashion as the Three Lions won 6-5 on penalties.

The victory secured third place in the Nations League and afterwards Everton goalkeeper Pickford told Sky Sports: “It was a very tough game.

“We showed character and belief again. Sometimes it’s hard to get up for a game like this ,but it just shows us where we want to go and how we get better as a team and bounce back.

“We always say, ‘Do what it takes to win a game’, and I was a bit nervous taking my penalty – but I’m not nervous saving them.

“I picked my spot and I always seem to be able to get a goal, but I’ve never taken one in a real game, so I was a bit nervous.

“I think we took (off) Harry Kane and some of the other lads who take penalties, so I wasn’t sure where I was in the pecking order. But it’s what you practise for, you practise all the time to make sure you make it easier on the day.”

Pickford sent Switzerland goalkeeper Yann Sommer the wrong way with a confident finish and the England man added: “It’s all about routine, I would say.

“You watch the top penalty takers, and Harry Kane’s got his own routine, so you’ve got to create your own routine to make sure everything’s done to perfection.”

England lost to Holland on Thursday and, asked for his thoughts on the Nations League campaign, Pickford added: “I think the biggest learning curve was Thursday night. We learned that we need to see a game out better and maybe get that next goal.

“But you can only learn by defeat really, I think these two games were a lot better than playing two qualifying games so that’s massive for us going into the qualifying campaign for the Euros.”