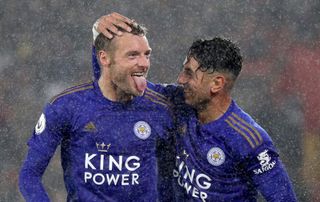 Ayoze Perez and Jamie Vardy each hit hat-tricks during Leicester’s 9-0 demolition of Southampton at St Mary’s.

Here, the PA news agency takes a look at instances of team-mates registering trebles in the same game.

Remarkably, there was a three-way split of the match ball at Maine Road 32 years ago. Neil McNab opened the scoring for Mel Machin’s City before Adcock, Stewart and White all put him in the shade by scoring three each. Huddersfield’s heavy loss was the worst defeat in the club’s history. A late penalty from former City midfielder Andy May briefly reduced the deficit to 9-1. The Terriers were relegated from the old Second Division at the end of the season.

The first time the feat was achieved in the Premier League era also came against a sorry Southampton side. In similar circumstances to Friday’s humiliation at the hands of Leicester, Saints were 5-0 down at half-time, with Pennant registering his three goals in the space of just 10 minutes. France World Cup winner Pires claimed his third just a minute after the restart before the visitors kept out Arsene Wenger’s Gunners for the remainder of the game.

Gary Neville endured many difficult moments during a torrid short spell as Valencia head coach, with an embarrassing Copa del Rey loss at the Nou Camp possibly the nadir. Neville’s side, who had Shkodran Mustafi sent off on the stroke of half-time, were ripped apart by the mercurial magic of Messi. Barca’s greatest goalscorer sealed his hat-trick in the 74th minute but was then pushed out of the limelight slightly by the exploits of former Liverpool man Suarez. The Uruguayan ended the game with four goals, two of which came in the final 10 minutes.

The two highest goalscorers in Napoli’s history took home a match ball each following a thumping Serie A success. Slovakia midfielder Hamsik, who left Stadio San Paolo for China in February having managed 121 goals, opened the scoring and then struck twice in five second-half minutes. Belgium winger Mertens, who earlier this week surpassed Diego Maradona to become the club’s second-highest scorer, had to wait until the final minute for his third. The action-packed fixture also included a red card for either side.

The goalscoring exploits of Perez and Vardy were among many noteworthy statistics from the biggest Premier League victory since Manchester United beat Ipswich by the same scoreline in March 1995. Spaniard Perez had actually endured an eight-game league drought for the Foxes following a £30million summer move from Newcastle before producing three clinical strikes. Former England striker Vardy demonstrated the variation in his play with a neat turn and finish, a thumping header and a stoppage-time penalty.