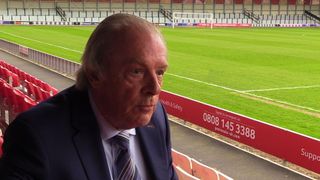 An extension has been arranged to allow the Professional Footballers’ Association to delay the release of its charity’s latest accounts.

The PA news agency understands the extension is the result of “ongoing conversations” between the players’ union and the Charity Commission, which on Wednesday announced it had opened a statutory inquiry into the running of the PFA charity.

It is understood the accounts for the year ending June 30, 2019 had been due to be published in November or December last year. The length of the extension agreed is not known.

The Charity Commission said “serious concerns” had been raised about the way the charity was being run by its trustees, who include PFA chief executive Gordon Taylor.

A statutory inquiry is the most serious intervention the Commission can make, and it has the power to remove trustees found to be guilty of mismanagement or misconduct.

The Commission’s head of investigations, monitoring and enforcement Stephen Grenfell said earlier on Wednesday: “The public rightly expect charities to operate to the highest standards – across all they do.

“Serious concerns have been raised about the way the Professional Footballers’ Association charity is run. We will now examine what has happened at the charity through a full statutory inquiry and ensure, where necessary, action is taken.”

PFA chairman Ben Purkiss said the Charity Commission inquiry should not get in the way of an independent review of the PFA continuing on its course.

Taylor announced in March last year that he would stand down following the completion of the review, with Purkiss and the other members of the management committee agreeing to do the same.

The statement from the Charity Commission underlines the seriousness of the investigation into the PFA Charity and I will await their full report before making any further comment.— Ben Purkiss (@bpurkiss23) January 15, 2020

Purkiss said on Twitter: “The statement from the Charity Commission underlines the seriousness of the investigation into the PFA charity and I will await their full report before making any further comment.

“Meanwhile, I would expect the independent review currently being undertaken by Sport Resolutions on behalf of the union to continue on its course with the full co-operation of everybody concerned.”

There is no clear indication of when the independent review will be completed, or the timescale for the Charity Commission inquiry.

The inquiry will examine whether there has been any “unauthorised trustee benefit” and “whether or not the trustees have complied with and fulfilled their duties and responsibilities under charity law”.

The PFA said in a statement: “The trustees have continued to co-operate fully, openly and transparently with the Charity Commission and will continue to do so throughout this process.

“The Professional Footballers’ Association charity trustees are all committed to adopting the highest possible standards in administering, governing and the management of the charity and will continue to work with the Charity Commission.”

Former England manager Sam Allardyce defended Taylor, who has been criticised over a variety of issues including his salary package of over £2m a year and a perceived failure to move quickly enough on research into whether footballers are at greater risk of developing neurodegenerative disease than the general population.

“People are talking about him needing to go before the inquiry has even been completed,” Allardyce told talkSPORT.

“People are adamant that they want to move Gordon on because he’s been there on a massive salary. There’s always been a huge amount of jealousy about that.

“As long as I’ve known him he’s always been honest and done what I consider to be an absolutely outstanding job for the PFA.

“Time will tell and we shouldn’t bear judgement as quickly as we’re bearing it. People are trying to hoist him before the facts are there. The man has dedicated his whole life to the PFA.

“One thing I would say is this – who takes over from Gordon Taylor? Who is clever enough and who has got the intelligence and who is good enough to know as much as Gordon knows, to be able to cope with that position? It’s a massive, massive position.”