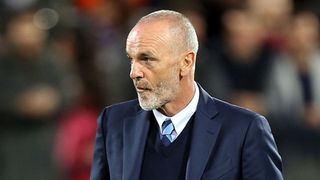 Inter coach Stefano Pioli says he sees "good things in the future" for the club and insisted he will not stand down after a 1-0 defeat at Genoa hampered the Nerazzurri's chances of a top-six finish in Serie A.

Former Inter forward Goran Pandev scored a 70th-minute winner to help Genoa earn a crucial three points in their battle against relegation, while Pioli's men have three games left to end their dismal run of form and push for sixth place, which would bring with it Europa League qualification.

A failure to win any of their last seven games has seen Inter drop to seventh in the table, and sixth-placed local rivals Milan have the chance to move six points ahead of them in their match against Roma later in the day.

Despite hopes of securing European football next season fading with each passing game, Pioli remains positive.

He told Mediaset Premium: "It might seem strange to say the situation looks positive, but I do see good things in the future for Inter.

"We have to concentrate on the present. We are disappointed with recent results and have to do more.

"I will absolutely not walk away, that is not in my mind and I have never considered it."

Geoffrey Kondogbia was then shown a red card for dissent, leaving Pioli with an additional selection headache when his side face Sassuolo at San Siro in their next fixture, which the Frenchman will miss through suspension.

Pioli said: "It's only normal that the fans are disappointed, because the results are negative, but if you have chances and don't convert them, it becomes difficult.

"We are all convinced that we can do more and we lost because we didn't have the necessary concentration on the decisive incidents."