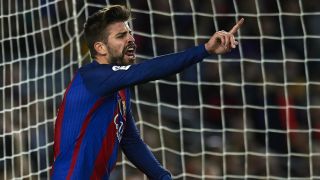 Barcelona defender Gerard Pique says it is essential video referees are introduced in La Liga to improve the standard of officiating.

The Spain international has caused controversy this season with comments about the performances of officials in Spain's top flight.

In January, Pique alleged that there was a pro-Real Madrid bias among referees after Barca were beaten 2-1 by Athletic Blbao in the first leg of their Copa del Rey tie, during which the holders had two penalty appeals turned down and Athletic ended the game with nine men.

A little more than a month later, it was reported that Spain's Referee Committee would press for sanctions against Pique after he posted a tweet highlighting what he believed were incorrect decisions awarded in favour of Madrid that handed the eventual champions an eight-point advantage over Barca.

He was eventually fined €3,000 in March for his repeatedly critical comments.

The use of a Video Assistant Referee (VAR) has been trialled in a handful of tournaments this season, including the Club World Cup, and the system will be used in the Bundesliga next term to assist with important decisions.

And Pique believes the same technology must be used in Spain to make the lives of the officials easier.

"If we're not champions, it's because we got fewer points than Madrid," he told a news conference when asked if refereeing decisions had played a part in Barca's defeat to Madrid in the title race.

"I'm sure that you can do a lot of assessments of the referees. The conclusion from this La Liga season is that VAR is essential.

"They should establish the necessary measures to bring it in. La Liga hasn't been up to standard. I said that in a match and they fined me, but they told me why and they continued at the same level.

"The more help they have, the better it will be for them."

Barca finish the season with a Copa del Rey final against Alaves on Saturday but Pique admits that lifting the trophy for the third year in a row will not gloss over their disappointments in La Liga and the Champions League, where they were knocked out by Juventus in the quarter-final.

"It's not a failure but it's not the season we wanted or dreamed of. And I don't assess my season in terms of Madrid's," he said.

"I think you can aspire to more than the Copa when it comes to Barca. Of course, we have a massive game on Saturday. One more title is something positive but it could have been better."