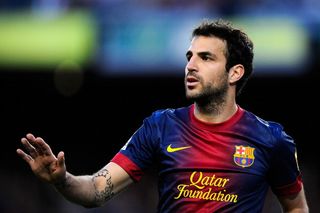 The Premier League champions have the ex-Arsenal midfielder firmly in their sights and manager David Moyes has confirmed that the club have tabled an improved offer for the Spaniard's services.

However, Pique has revealed that Fabregas has no intention of leaving Camp Nou.

"United are wasting their time," the 26-year-ol​d said, in quotes reported by The Sun.

"It took a long time for Cesc to get his dream move back home and he won't give it up. This is home, it is where his family is, and he is playing with his closest friends.

"He has told us he is happy and that he intends to stay with Barcelona."

The news will come as a hammer blow to United, who have missed out on a number of their rumoured targets during the close-season, including Kevin Strootman and Thiago Alcantara.

Moyes has hinted that they will push hard for Fabregas, though, who scored 11 goals in 32 league appearances last season, as they look to bolster their squad ahead of the new season.

"I think a point does come but when you are interested in good players you want to give it every opportunity to materialise — and I'll do that," he said.

"I'll hope that things can continue to move forward."