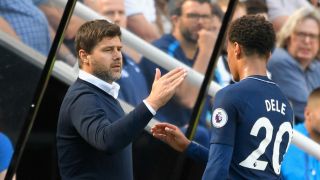 Dele Alli is going through a difficult period but Tottenham manager Mauricio Pocehttino thinks he will be better for the experience.

England midfielder Alli has three goals in eight appearances in all competitions for Spurs this season but has failed to recapture last term's stellar form.

The 21-year-old has been compromised by suspensions in the Champions League and at international level but Pochettino feels this is all part of the development process for a player he said "must learn" after being booked for diving in Tottenham's previous Premier League match at Huddersfield Town.

"It's true that it is a difficult period - he cannot play in the Champions League, was banned from the national team - he's in a period not too solid for him," Pochettino told reporters ahead of Spurs' match against Bournemouth, where his team will once again go in search of their first league win at the national stadium.

"His character makes him a special player. It's only time, again, [that Alli needs] to start to perform like before.

"Now it's a not too much of a solid period, but a normal period to come strong again. He is very concerned about everything now.

"Sometimes it's good to feel you are human. For him, sure, that situation helps him improve."

Pochettino conceded a levelling off period following Alli's rapid rise from MK Dons in League One is understandable.

"It's about being more mature, no? He started from here [low] and from two seasons he was at the top of the hill. Maybe now he needs to moderate.

Alli features as part of a young English core in Pochettino's team and the former Argentina defender believes his exploits along those of the likes of Harry Winks – the Spurs midfielder who impressed on his England debut against Lithuania in midweek – shows the Premier League has a strong and underplayed domestic talent pool.

"Yes, of course the talent is there. No doubt about that. No doubt," he said. "The English players are so talented. It's only about your vision and how you perceive them and then how you provide them with the platform and the tools to play and to perform.

"When we arrived here five years ago it was a little bit of a taboo - 'oh, young players do not play, we don't have the same talent as in Spain, or Argentina, Brazil.'

"We didn't say anything. We didn't say yes or no. We watched and we thought, 'oh, you have the same talent. You must believe in your talent and provide the platform to show they are capable of playing at a good level."

Pochettino added: "After that we started to work and tried to prove that English talent is like in Spain or in Argentina or Brazil and we started to believe. We love to give the possibility to the young and help them to achieve their dream. They worked hard and took the opportunity."