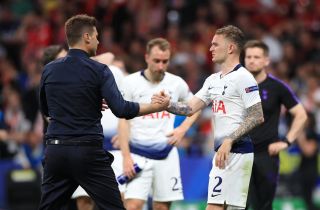 Tottenham manager Mauricio Pochettino is looking at the bigger picture after his side lost the Champions League final to Liverpool.

Spurs were playing in Europe’s biggest club game for the first time in their history, but went down 2-0 to their Premier League rivals in Madrid.

They will have a definite sense of regret as such an opportunity to win the Champions League may never come around again, with Spurs arguably the better team for much of the game.

The journey was incredible, the memories will live with us forever. It wasn’t to be this time, but we’re only just getting started.— Tottenham Hotspur (@SpursOfficial) June 1, 2019

They missed several chances to cancel out Mohamed Salah’s second-minute penalty and then succumbed to Divock Origi’s late second.

But Pochettino, who refused to be drawn on his future, was keen to reflect on a season where they produced their best-ever European Cup run, booked a fourth successive top-four spot in the Premier League and moved into their new stadium.

“Now it’s impossible to talk and we will all be very disappointed,” he said.

“The season was fantastic. We need to feel proud. I feel so proud of all the players, the fans and the club.

“We can’t give the last moment, the last game of the season, a massive reward for our fans.

“It was a final and we’ve spoken in the past that a final is to win, not just to play well. It’s about the details.

“It’s so painful but at the same time we need to be calm in the way that we talk and analyse things because the season was fantastic and we need to feel proud – to finish in the top four and play in the Champions League final for the first time in the history of the club.

“It’s going to be painful because we lost the final but at the same time we need to be positive.”

Midfielder Eric Dier, who came on as a second-half substitute, believes Spurs can learn from their opponents, who bounced back from final misery last year to win the competition.

“We can learn a lot from the whole journey we have been on this season, in all competitions, we have had a fantastic Champions League campaign,” he said.

“We have proved a lot to ourselves, we can be very proud of what we have achieved to get to this point. We can learn a lot from this game but we need to digest it first.”