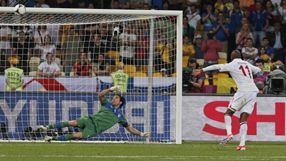 Premier League duo Ashley Cole and Ashley Young were singled out for comments on the online social networking service Twitter after they both failed to convert penalties in a shootout against Italy in Kiev.

The game was watched in Britain by nearly 25 million television viewers.

In a statement, police said they were examining possible offences under the Public Order Act after a complaint by a member of the public.

They said the comments against the Chelsea defender and Manchester United winger are believed to have been posted from a Twitter account based in London, police said.

Other users criticised his rants, only to be goaded in a series of offensive postings.

The user suggested police would understand the remarks were posted in jest.

"Wrong. Your comments may constitute a public order offence. We have advised complainants how to officially report this to police," West Midlands Police tweeted in response.

This is not the first time British police have investigated claims of online racism.

A student who used Twitter to mock Bolton Wanderers' Fabrice Muamba after the midfielder suffered a cardiac arrest playing in an FA Cup tie was jailed for inciting racial hatred in March.

No arrests have been made.