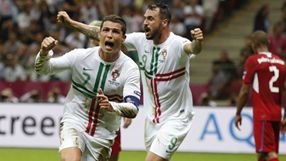 Ronaldo's inspired goal-scoring performances against the Netherlands in the final group game and the Czech Republic in the quarter-finals has set up a clash on Wednesday with neighbours Spain, which faces its own economic crisis.

Beating the world and European champions will be a tall order but, with Ronaldo leading the charge, Portugal are hoping to end the dominance of their Iberian rivals who are on an 18-game unbeaten run in competitive matches.

The Portuguese are targeting the final and may perhaps draw inspiration from a local legend which says a young king who vanished in battle in the 16th century will return, messiah-like, to save Portugal on a mysterious foggy day.

Although the weather forecast for Sunday's Euro 2012 showpiece in Kiev points to a warm summer's night, the sight of Ronaldo shaking the trophy in the air would have deep meaning for a country torn apart by austerity.

The fact that Portugal, who have reached three semi-finals in the last four European championships, continue to mix it with football's major powers has brought pride to a nation reeling from serious economic uncertainties.

"It is impressive how a small country goes neck and neck with the biggest in Europe and the world," said A Bola daily sports newspaper.

"It defies all the logic of the modern world and, above all, defies the logic that who has money has power, and rules over others."

Still, like the young king of legend, D. Sebastiao, Ronaldo and his team-mates have not always been immune to the anger of the people.

While D. Sebastiao was accused of being spoilt and a raving warmonger, Ronaldo's troops were also criticised until the captain suddenly found the sort of form he had displayed as Real Madrid won the Spanish title.

Having bounced back from not winning a game this year and losing their opening Euro 2012 match to Germany, Portugal are now back in favour. Public opinion turned on its head after they scraped a 3-2 win over Denmark and overpowered the Dutch and Czechs with the flying Ronaldo at his best.

"How many of us are there? Ten million in Portugal? Four Golden ball awards. Four," a relaxed Jose Mourinho, with a proud look on his face, says in a TV advert referring to the European Footballer of the Year award, or Ballon d'Or, won by Eusebio, Luis Figo and Ronaldo and his own World Coach of the Year award.

The advert is for Millennium BCP, Portugal's largest private bank by assets, which uses the Real Madrid coach to advertise a time deposit d ubbed Special One Top.

Mourinho's image brings much-needed credibility and trust at a time when BCP and other Portuguese banks are fighting to strengthen their capital base.

BCP stock is at record lows around 0.10 euros and the bank was forced to draw on funds provided under the country's 78 billion euro IMF/EU bailout.

Ronaldo advertises a similar deposit from BCP's rival Banco Espirito Santo where he invites people to "invest in themselves" and save money.