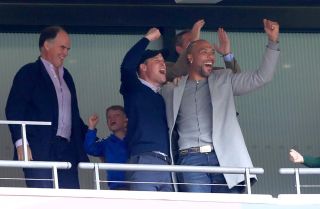 The Duke of Cambridge was present to watch his team beat Derby 2-1 in the Sky Bet Championship play-off final thanks to goals from Anwar El Ghazi and John McGinn.

William is also the Football Association president, and he demonstrated his passion for the game when the final whistle blew on a tense promotion decider.

A win that gets the royal seal of approval 👑#AVFCpic.twitter.com/3Ay4qJoE12— Aston Villa (@AVFCOfficial) May 27, 2019

The win sees Villa return to the Premier League for the first time since the 2015/16 season, when they finished bottom of the division with 17 points.

William celebrated the achievement with Carew, who scored 48 goals in 131 appearances for the West Midlands club.

Congratulations Aston Villa on achieving promotion back to the Premier League! #UTVhttps://t.co/SO8p5ZIITu— Kensington Palace (@KensingtonRoyal) May 27, 2019

Villa suffered play-off final heartbreak last season when they lost to Fulham, who have been relegated straight back to the Championship.

Aston Villa will take their place in the Premier League next season alongside Norwich and Sheffield United, who both won automatic promotion.