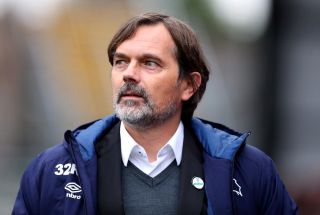 Derby boss Phillip Cocu thinks the decision to award Middlesbrough a second-half penalty stopped his side in their tracks at the Riverside Stadium.

The Rams had to come from behind twice to earn a point and a 2-2 draw that has extended an unbeaten run to five matches in all competitions.

In the end, Derby were indebted to a brilliant stoppage-time leveller from Duane Holmes to avoid defeat against Jonathan Woodgate’s youthful and improving Middlesbrough.

Before Holmes’ strike, Boro had gone ahead twice. Lewis Wing’s excellent strike in the 16th minute was cancelled out by Jason Knight’s cross-shot that ended up flying inside the back post.

But Middlesbrough went ahead again with 24 minutes left when Paddy McNair struck from the penalty spot after Patrick Roberts had gone down in the area under a challenge from Matt Clarke.

Cocu said: “It was no penalty, from my angle Matt played the ball.

“I didn’t see it on TV or the big screen but I thought it was a correct tackle and I don’t know how many penalties we have had against us but that must be 10 now.

“If you get too many you get a bad feeling, I don’t like it.

“We have been quite unlucky on a few occasions now and it is such a key moment in the game because we had scored and we were close to getting a second.”

The Dutchman added: “I said I don’t want to be here at half-time again talking about a lack of desire. I can’t allow the attitude returning to be a point of discussion in our team.

Middlesbrough boss Jonathan Woodgate was “gutted” that his side’s display did not result in a fifth straight win.

Holmes’ leveller arrived after Middlesbrough had done well to clear their lines more often than not, and even when he scored it was a sweet volley from 25 yards that had come from McNair’s headed clearance.

But Woodgate is encouraged given Boro were battling at the wrong end of the table until a run of December form that earned him Manager of the Month.

He said: “The lads knew what they were going to do in the second half, put more pressure on us, being more direct, you could see the first half when we pressed and how we pressed was good.

“They realised they couldn’t play against us and they went more direct. That was a decent performance, it deserved a win.

“We need to be putting the chances away, they are disappointed in there but they have come far.

“It is getting there, it takes time. There will be rocky roads ahead. But it was nice to see the fans on the edge of their seats with pockets of play. They are starting to do what I want them to do.”

Roberts was particularly impressive on his second appearance since arriving from Manchester City on loan along with Lukas Nmecha.

“Patrick hasn’t played at all for Norwich (loan) this season. He has come in with minimal minutes and you can see the quality he has,” Woodgate added.

“He was a constant threat, he will only get better. I am excited about him. He can be a really good player with us.

“He has only been in the building a week, not loads, but it isn’t just about him…the team ethic and team spirit is what I want.”