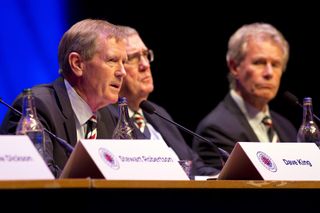 Dave King has thanked the Rangers shareholders for backing a move to wipe out £14million of debt.

A general meeting was held at Ibrox on Wednesday, with shareholders asked to waive rules that would have forced the chairman to make a bid for the remainder of the club’s shares.

And the motion was backed by 81.9 per cent of the votes, meaning King and his ‘Three Bears’ allies – Douglas Park, George Letham and George Taylor – can press ahead with plans to recoup the loans they have given the club in recent years in the form of shares at 20p a piece.

King and his allies will now further strengthen their grip on the club, controlling a stake worth around 54 per cent of the club.

And the South Africa-based businessman thanked shareholders for their support.

King told the club website: ”This is an important marker in the recapitalisation of the company and significantly improves its balance sheet, enabling the conversion of over £14m of debt into shares.”

King has previously been forced to fight off attempts by the Takeover Panel requiring him to make an offer to buy out the rest of the club’s shareholders.

That came after the panel ruled the Castlemilk-born tycoon had worked “in concert” with the Three Bears when they snatched up a stake worth more than 30 per cent of the Light Blues in order to oust the former Mike Ashley-backed regime at Ibrox.

King was spared an £8m bill when the majority of shareholders decided not to take up the offer.