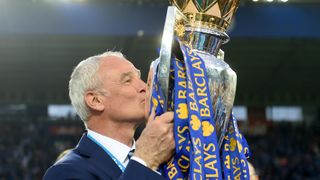 Claudio Ranieri says he is "stimulated" to return to management amid speculation linking him with the vacant jobs at Crystal Palace and Watford.

The 65-year-old has been installed as the favourite for the Palace role following Sam Allardyce's surprise resignation on Tuesday and remains a candidate for the position at Watford after the departure of Walter Mazzarri.

Ranieri led Leicester City to a stunning Premier League title success in 2015-16, only to be sacked in February with the Foxes enduring a miserable defence of their crown.

But the Italian is ready to return and revealed he is optimistic he will be in a job by the start of next season.

"I hope so," he said. "I'm very stimulated to make another great season."

Asked about the Watford vacancy, Ranieri replied: "It is only rumours. I feel as well [I could be] a European coach. Italy, Spain, France, England for me is OK."

And Ranieri insisted he was unperturbed by the amount of Premier League managers losing their jobs.

He said: "I think in Italy we are used to this, every three or four matches changing the coach! All the world is the same."

Ranieri stressed last week that he would choose his next move carefully and had to be "together" with any new club's project.