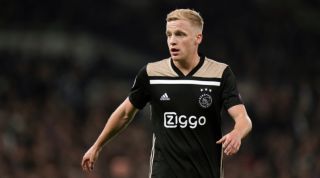 Pogba has been frequently linked with a summer switch to the Bernabeu after a tumultuous campaign at Old Trafford that could end with Ole Gunnar Solskjaer’s side missing out on Champions League qualification.

Marca reports that the France international remains the preferred option for Madrid coach Zinedine Zidane, but Van de Beek has been identified as a Plan B.

Alternatives to the United star are being considered given his high salary demands, and the 22-year-old has impressed during his club’s surge to the Champions League semi-finals.

The Netherlands international has featured in every game of the Dutch club’s run, including their 5-3 aggregate win over Real, and scored the winning goal in their semi-final first leg win over Tottenham Hotspur this week.

Van de Beek is understood to have an asking price of around €60 million (£51 million) but has also caught the attention of PSG.

In addition to his European exploits, the midfielder has scored eight goals in 32 Eredivisie appearances for Ajax this season.